New York, NY, August 16, 2016 —
“And those who were seen dancing were thought to be insane by those who could not hear the music.” ~Friedrich Nietzsche

The boys and girls’ feet are still.

The sneaker-scuffed court stretches between the two groups like a lobby of loud noise, angst, and green neon as the camera pans the shot from wall to wall. It’s awkward. Nobody makes a move. We, the audience, sympathize. We’ve seen these scared kids before.

And, really, I could be describing any number of films here, couldn’t I?

Like a kid white-knuckling a blanket and peering into a dark closet, the scene of young people holding battle lines on a dance floor is a familiar cinematic refrain. Equally familiar and effective, perhaps, because it equally recalls an old terror — that shared rite of passage into adulthood, that first encounter with what our folks called “the ice.” And maybe, as with many rituals, there was some odd cultural lesson to be learned there in that gym — with all of us staring nervously out at the other side and at the other sex. We all heard the same music. We all wanted to dance. And the first one who did was a hero.

However, if there is a cultural lesson there, it’s one that’s admittedly odd, and that’s perhaps irrelevant when the culture’s changing, when more and more of us are dancing with our headphones on — the so-called “silent disco” fad now en route to ubiquity, and perhaps vying for ritual status itself.It’s already invaded many of our social hubs: the malls, fitness studios, and nightclubs. Our corporate events, teaching workshops, and bar mitzvahs. What may have at first seemed predestined to be a flash-in-the-pan craze has kept its spark long enough to become something more — a curiosity, a point of study, or (more honestly), something that I should maybe think about giving a shot.

Castel Valere-Couturier, the founder of the silent disco company Sound Off, is a friend of a friend. Again, speaking of the cultural landscape, and I know it’s just me here, but the fact that I’m two degrees away from a major silent disco entrepreneur has to mean something.

Still, at face value, the notion of a silent disco sounds counterintuitive to say the least, laughable to say the most. I remember first seeing one during an outdoor event in downtown Denver. It was the annual Big Wonderful festival, and a sort of dance corral had been set up in a corner section — with channel-tuned headphones for all who paid entry.

Inside there were about six people, heads bobbing, and feet skittling up dust with a lively and somewhat insular energy – their careless bouncing  like middle-schoolers on marionettes (A Charlie Brown Christmas comes to mind) in the careless way they bounced through that ad-hoc corral.

I probably looked like an enormous scoff given arms, legs, feet, and a cup of beer, watching them through the wooden rails.  Though I do remember glancing over at the nearby stage as some cover rock group wailed for a crowd who’d paid nothing extra to listen. And in typical Denver concert-goer fashion, these people stood largely motionless — a few windy sways (possibly alcoholic in nature) being the only sign to the deaf that someone was rocking out to “Slow Ride.”

Of course, I wasn’t dancing either. But I was several beers deep, and, aside from a high school incident involving a pair of ripped slacks, my history of cutting rug wasn’t exactly laced with much trauma. In fact, I’d say it was about 95% positive. It would’ve only made good & proper sense, then, for me to have broken into a seizure of early 00’s white boy dance moves: the worm, the helicopter, the cossack. No doubt I could’ve formed a modest semicircle of beer-holding scoffy onlookers myself if only I had the guts. And that’s the only logical conclusion — that I was too nervous, too self-conscious, too scared to enjoy myself. That sweaty-palm gym is really never too far away.

Of course, Sound Off’s Castel, along with other Silent Disco purveyors, claims to have the perfect solution. Put on a pair of headphones and tune in, he says, and the anxiety just evaporates. According to him, the behavioral difference between silent discoers and regular discoers is extremely noticeable. “Everyone’s in their own zone,” he tells me, “People go deeper into their practice…It’s everyone’s party.”

It would sound like hardcore shilling if I didn’t know Castel’s story. He’s not some trend bandwagoner, not a [example]. He’s one of those enviable career-hobbyists who was able to make it out of the workaday, coffee can drudge by finding something he truly enjoyed and, like that heroic first guy out on the dance floor, he committed to it.

“It was serendipitous,” he says. “I was at a trade show for this optic lens sales job, and a friend & colleague of mine had a heart attack. Right there on the floor. Just dropped dead. That’s when I knew I had to take some time and re-evaluate what I was doing.”

While on his soul search, Castel found himself in Tel Aviv, Israel at a bar where he noticed that everyone on the beach was dancing with headphones on. “There you had to listen to headphones if you wanted to hear the DJ outside,” he says, “because there were these strict codes for noise violations.”

Curious and, like me, a little skeptical, he decided to try it out for himself. “It was so fun,” he recalls, telling me about his first silent disco experience. “I was fascinated.”

Inspired and obsessed, he immediately began researching different factories to get a feel for potential headphone suppliers. The materials and logistics of the business, however, weren’t the only obstacles, as he recalls.

“I was living in Denver at the time of our first events. That’s where they were, in Denver. Nine out of ten people, they were total skeptics. Thought it was anti-social,” he says.

And this was also how my knee jerked. Dancing, at least public dancing as I see it, is a social phenomenon. Researchers have even shown that dancing in sync to music reinforces social relationships between members of different cultures, which may be one of the reasons that moving to rhythm is, like sharing meals, one of those cultural common denominators – as grandiose as it may seem, dancing may be essential to any sound civilization.

But, as Castel and others like him look to add a new dimension to dance culture, I have to wonder if their way isn’t better. According to Castel, when he was doing the first silent disco gigs in Denver “Everyone’s mind was changed.”

I still have  a few doubts though. “What about when people want to socialize?” I ask him, “Isn’t one of the biggest reasons people go out to a dance club to, you know, ‘hook up?’”

“How easy is it for you to try to talk to someone when the Little John is blaring so loud you can’t even hear yourself?” he counters. When you’re in a silent disco, he explains, their headphones act like flags on mailboxes. If someone’s got a message for you, all this person has to do is remove those headphones and people will know that he/she wants to talk.

And, admittedly, this might be a better “hook-up” system than the one currently in place, one in which the mating dance is basically a blind gambit. That is, unless someone’s wearing a ring or grinding a pelvis, there’s really no way to anticipate rejection – and even these signs aren’t guarantees. According to Castel, the silent disco effectively noise-cancels the confusion of a dance club hook-up by tagging us with less ambiguous signifiers for “available.” You no longer have to be hyperaware of tiny visual cues. If anyone wants to hear you out, they’ll be listening, obviously.

This may be more mimetic of our culture’s shifting dating dynamic in general – one that’s increasingly dependent on a clear status, like “single,” “in a relationship,” or the less clear “it’s complicated.” Perhaps, as new technologies change the way we interact (and thus culture at large), ours may be more of a system, and less of an art, of romance.

From a traditional perspective, this may be unnerving, but one need only look at the success of online dating sites (which have gone from taboo, to weird, to typical in just about two decades) to start wondering whether systematizing our dance ritual might be a good thing after all.

Instead of waiting through a song you hate, you can change the channel on your headphones (or just take them off entirely and chat with someone). “It’s more than a party system. You can control your environment; it’s custom-tailored, and there’s a trend toward this,” Castel tells me.

It’s a trite conclusion to say that “only time will tell.” It’s also a little disingenuous. Time is already telling. It shouldn’t be controversial to say something like “this is the dancing of today,” because, well, it is, for now.

Sound Off offers rental, retail, and event production solutions to execute almost anything you can envision across the United States, Europe, Asia, and Australia. Contact us to learn more about why we are the go-to provider of headphone technology for companies like Live Nation, Lululemon and Wanderlust. Follow us on Facebook and Instagram @soundoffexperience 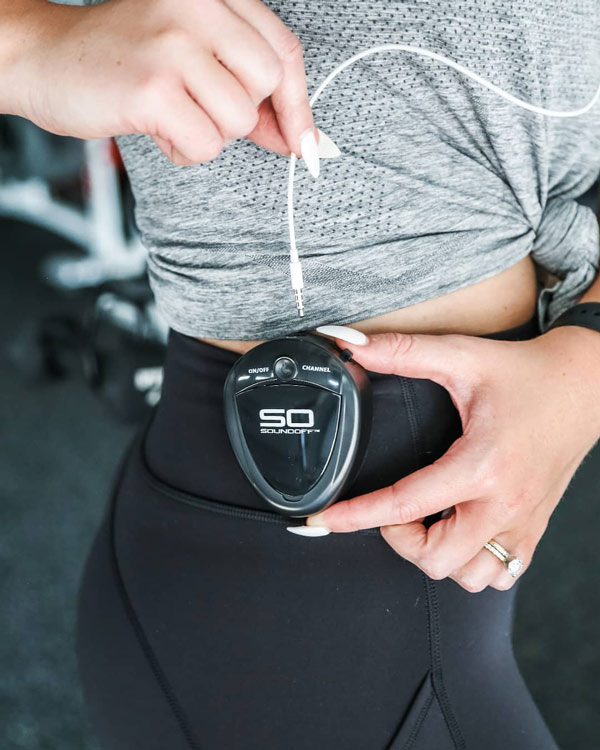